For I know the plans I have for you,” declares the Lord, “plans to prosper you and not to harm you, plans to give you hope and a future.  Jeremiah 29:11

Is the feeding center making a difference?  Three and half years ago Lazaro found a small boy working in the El Tejar dump trying to collect recyclable material in exchange for money.  He was so malnourished that his hair was turning white.  His mother agreed to allow him to be part of the program.  I can remember him being so shy and timid without a genuine smile.  Now he is healthy, active, and has a genuine smile!

A few weeks ago the children were telling Glendy that a girl was wrapping her chicken in a napkin and hiding it in her pocket.  The small girl explained to Glendy that the previous night her baby sister was crying for milk, but her mom only had coffee to give the child.  The little girl said her mom cried because they did not have money for milk, but tonight she is going to give her sister the chicken so she will no longer be hungry.

The feeding center is strategically designed to allow one child per family to participate in the program.  In January, there was a new girl to the program who has an identical twin sister.  Several weeks later, Glendy repeatedly called the girl’s name, but the girl ignored her.  The girl would not respond until Glendy called the name of her twin sister.  The twins had been taking turns coming to the center!  They explained that they agreed to take turns going to the center so they could each have food.  They are now the exception to the rule and both of the girls attend the feeding program!

One day this month, one of the boys will welcome a new sibling!  The mother has four young children and left an abusive relationship a few months ago.  They are living in one room without electricity or water.  She makes about $7 per day making and selling tortillas locally.  Obviously, there is no such thing as paid maternity leave or government assistance in Guatemala.  During the hours at the feeding center, the 8 year boy is able to eat a hot meal, brush his teeth, complete his homework, play soccer with his friends, and enjoy being a kid!

In May, the local police came to visit Lazaro in order to see the feeding center and to thank them for having a positive influence in the community.  Glendy shared with me that people are always asking how to enroll their child in the program because they have a strong reputation of making a difference academically and spiritually in the lives of the  children.

How Can I invest in the life of a child?  Many of you stepped up and sponsored a sweet child to go to school and participate in the feeding center.  The cost is only $40 per month ($1.33 per day). 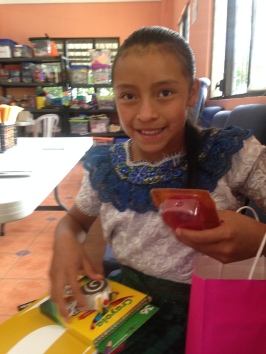 If you have an interest in sponsoring a child, you can send an email to tcturrentine@gmail.om or shininglightabroad@gmail.com.

If you currectly sponsor a child and you would like an updated picture or academic report (through facebook or imessages) send me an email or facebook message!

If you want to see the cycle of spiritual darkness and poverty end then invest in the life of a child!  There are 90 precious children who are grateful that someone has invested in their lives!